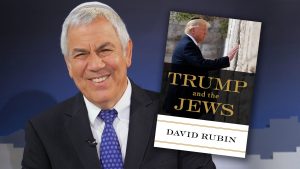 David Rubin is a former mayor of Shiloh, Israel – in the region of Samaria, which together with Judea, is known to much of the world as the West Bank. He is founder and president of Shiloh Israel Children’s Fund (SICF) – dedicated to healing the trauma of child victims of terrorist attacks, as well as rebuilding the biblical heartland of Israel through the children. He founded this organization after he and his then three-year old son were wounded, but thankfully survived, a terrorist attack on the car they were in. You can get in touch with David Rubin at www.DavidRubinIsrael.comor at www.ShilohIsraelChildren.org

Help me welcome back to the program, Mayor David Rubin.  David, thanks for taking the time to come back on the podcast today!

David, just to give folks some perspective, in case they missed your prior interview where we discussed this, tell us about you and your son being ambushed and surviving that terror attack. Tell us what happened that night.

Were the terrorists ever caught and prosecuted?

Land for Peace is a false narrative being pushed on Israel.

Recently, there was some controversy surrounding Representative’s Tlaib and Ilhan Omar, from Minnesota. It seems they were going to try and visit Israel but were denied entry. Then Tlaib appealed on humanitarian grounds. Israel said OK, but then she changed her mind and said Israel was restricting her rights. Based upon your knowledge, background and experience from the Israeli side of things, what was happening behind the scenes?  What was the government of Israel considering when all of this transpired?

Their itinerary listed visiting the Temple Mount with PLO officials. That is not allowed by agreement between Israel and the PLO, correct?

Tliab had agreed to the conditions Israel initially responded with. But then she changed her mind. Why would she do that?

Folks, I want to encourage you to go to the links in the show notes below and order your copy of “Trump and the Jews.” I’ve got my copy and it is an awesome read. So much information you receive from the liberal media is distorted – a lot!  David Rubin’s unique perspective gives you a clear understanding of the complicated nature of the small, but highly influential American – Jewish community here in the States. His book will also give you a look the relationship between Jewish community here in the United States, the role of religious Jews (as well as Christians) and their passionate support of President Trump and State of Israel.

Just click the link below and order your book today!

Book:  “Trump and the Jew’s”on Amazon