Leadership. That means different things to different people. It almost always means, in a nutshell, to motivate others to accomplish things that need to be done in a way that leaves them feeling good about themselves and the job. I heard it put one way that “leadership is leading people down a path they do not want to go, accomplishing things they do not want to do and then having them thank you for it when they finish.”

My guest today has been a leader for almost his entire life. An eagle scout, youth camp leader, then a military officer in my alma mater, if you can call it that – the United States Army Cavalry. And not just any officer…

Craig Whelden spent 30 years in the US Army, followed by seven years in the private sector and then another nine years as a member of the Senior Executive Services with the Marine Corps. He started off as an Armor officer in the US Cavalry – hurrah! Now you know why I’m so excited today… He has led soldiers, sailors, marines and civilians at all levels of leadership. From a young lieutenant to General Officer to Senior Executive. He served 10 years in Europe and another 12 in the Pacific.

He commanded a base in Germany while a Cavalry Officer and, as a Brigadier General, oversaw a $1.6 Billion program supporting soldiers and families world-wide.

He was present at the Pentagon on 9-11. He led efforts to secure Hawaii from terrorist attacks. After retiring from the Army in 2003, he wasn’t finished yet!  He then went on to chair a national conference entitled “Information Sharing and Homeland Security” for another three years!

In 2008, he was asked to organize and run a Secretary of the Army initiative to bring greater awareness to the American public of the sacrifices our service members and their families are making during the time of war. For this, he was awarded the top two awards for civilians by the Secretary of the Army Pete Geren.

In 2010, he became the Executive Director for the Marine Corps Forces Pacific, overseeing a multi-BILLION dollar program to reposition Marines in the Pacific – the largest such undertaking since WWII.

Then, in 2011, he was inducted into the Purdue University Tri-Service ROTC Hall of Fame.

In 2019, he transitioned to the next chapter of his life by moving to Blufton, SC and became an award winning, best selling author of the book, “Leadership: The Art of Inspiring People To Be Their Best” and is now a motivational speaker on leadership and performance excellence…

One chapter I found interesting was the “One Percent Rule.” Explain that to our listeners and how that can apply to them in their environment and how they move from where they currently find themselves to achieve where they would like to be…

You give some especially poignant examples of risk taking and risk aversion.  Can you explain the risk-reward strategy you outline in your book and how that can be used in business as well?

You talk about the “light at the end of the tunnel” in your book. I found that very interesting. Can you explain that to our listeners?

As we get ready to close, as I’ve mentioned throughout the interview, all of these topics – and more – are covered in your book, “Leadership: The Art of Inspiring People to be Their Best.” Correct?

Where can people get a copy of your book? Amazon?

If you are not in business, that’s OK!  This book will help you to achieve your next rung on the ladder of life! This book is AWESOME!  I can’t explain it any better than that! It is an easy read and the examples General Whelden have included are spot on, true, living examples of the principles he shares. You need to get this book!

In fact, get two or three copies and use them as gifts! Go down in the show notes and order your copies today! Right NOW!  While you are thinking about it! Do not let the devil tell you to wait until later!  You know as well as I do that if you put it off till later, it probably will not get done. So don’t do that! Order your copy today!

General, thank you again for your time! 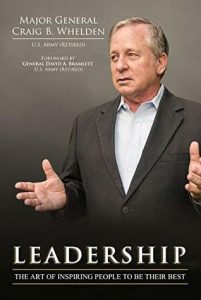 Book:  “Leadership: The Art of Inspiring People to be Their Best” – on Amazon