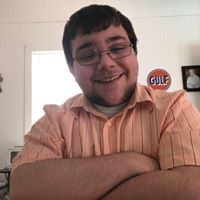 Trey Olds has been a friend of this ministry for several years now. Every so often, I want to catch up with what he has going on in his life.  Trey is an inspiration to so many people, and I know he will be to you as well.

But, in addition to conducting his interview program, he has also started a new radio program, called, “The Olds’ Oldies Music Show.”  Trey plays music from the 1950’s up to, and including, the 1990’s.  His programs are heard all over the normal podcasting platforms and we will give more information on that in a few minutes.

I first met Trey back in 2017. I did some voice overs for his interview program when he was first starting out.  But when my own podcast and radio ministry began to grow, I just did not have the time to devote to that aspect of radio anymore.  But Trey and I have stayed in contact and I want you to help me welcome back to the program today, my good friend, Trey Olds!

Do you still maintain contact with any of those celebrities?

Now, I want to shift gears here a little bit…

I’m guessing, this is just a guess, that name had something to do with the genre of music your playing? Correct?

I know copyright and royalty issues plague online radio programs. I have to be very careful in the music I allow on my radio station. I had to seek out and get permissions and all of that in order to protect myself from trouble down the road.  Did you have to do the same?

How long is your program and what frequency do you publish new shows?  SPLIT

Will you do any interviews on that program?

Do you an DJ work on that “Oldies Music Show?”  Like voice over commercials, introducing the next track, and things like that?

You recently started a project that involves you playing several different roles in a type of “theatrical production” but for radio… correct?

And you are playing all of the characters?

Is that hard to play different characters?

Tell us a bit about this project and how you came up with the idea?

How long does it take you to create a script for this type of production?

How can people listen to these programs?

Trey, we are about out of time. I want to give our listeners a chance to talk with you, perhaps to ask you to do an interview such as this, OR to become guests on YOUR radio program. How can someone get in touch with you?

Folks, I am personally testifying to Trey’s interview skills. I’ve heard him interview actors and actresses that you watch in the movies or see on TV. He is a professional in every sense of the word. I want you to check out “The Trey Olds Radio Show” and also, be sure to subscribe, not just to the interview program, but also his new program, “The Olds’ Oldies Music Show.”  I will be putting links to these programs, as well as Trey’s contact information, in the show notes below/

Trey, it was great to talk to you again, man! You are doing an awesome job –keep up the great work.  I know I’ll be a guest on your program here in the near future!  I’m looking forward to that as well.

Folks, you really, truly, need to to subscribe to Trey’s programs. Help this young man out to achieve his dreams and to grow his programs. Just go to the links below and subscribe to the shows.

That is all the time we have for today. For Trey Olds and myself, this is Pastor Bob reminding you to BE BLESSED IN ALL THAT YOU DO!