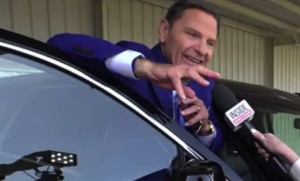 We have come to expect this kind of treatment from the twisted, demented media representatives today. No church or ministry that has a pubic presence is going to be immune to these attacks. Jesus even warned us in John 15:18-25,

18 If the world hate you, ye know that it hated me before it hated you.

20 Remember the word that I said unto you, The servant is not greater than his lord. If they have persecuted me, they will also persecute you; if they have kept my saying, they will keep yours also.

21 But all these things will they do unto you for my name’s sake, because they know not him that sent me.

22 If I had not come and spoken unto them, they had not had sin: but now they have no cloak for their sin.

23 He that hateth me hateth my Father also.

24 If I had not done among them the works which none other man did, they had not had sin: but now have they both seen and hated both me and my Father.

25 But this cometh to pass, that the word might be fulfilled that is written in their law, They hated me without a cause.

I’ve been a follower and supporter of Brother Copeland since 1992. I attended and graduated from Jerry Savelle‘s Bible school in 1999. I have been a partner with both of their ministries since that time. I have learned so much from their teachings over the years. I have witnessed their integrity. They never waiver from the Word.

I have also been members of several different churches over they years (as we have traveled and moved from place to place). Various denominations. Various stands on Biblical Theology. I have agreed with some aspects of the interpretations each pastor brings to the discussion. I’ve disagreed with them as well. I treat Brother Copeland and Brother Savelle the same way. I treat my wife and family the same the way. No two people will EVER agree 100% on anything.

But to see so called “Christian Pastors” fail to publicly condemn a media ambush on a man of God speaks volumes to the lack of integrity in the heart of pastors today. It can also be a reflection of what is being taught inside their churches today.

I can sum it up on one sentence: “We pray for our own and to hell with everyone else.”

This is the reason society is the cess pool it is today. Churches only worry about their own people. They “talk a good game” of making a community impact. But very rarely work together (T-O-G-E-T-H-E-R) with other churches to change the community. Usually, it will be one, maybe two, that get together and try to do something special for a neighborhood. But when faced with opposition, it falters and dies. Then it is back to normal.

Brother Copeland has gained the attention of the liberal media because he refuses to play by the socialist rules that are being promoted today. So, they do their best to discredit him and his ministry. Many “not so famous” churches do the same thing. That tells you a lot about their true hearts. In the Bible, it is called “envy.”

You do not have to accept each and every doctrine of each and every pastor as your own. You are not going to hell for believing in speaking in tongues or laying on of hands or for believing in healing and miracles. You will not go to hell if you do not believe in those things either. You will not go to hell if you believe God can prosper you immensely or if you should remain poor and give away every dime you make.

It WILL NOT GET YOU INTO HEAVEN, either!

We can all claim only ONE SPOT of common ground – and His Name is JESUS!

Despite what other religions say, teach or DO – only Christianity can claim “DONE.”

As brothers and sisters in Christ – our job is to support one another when attacked by demons and demon inspired people. If we do not support one another, the devil can succeed in bringing division among us. This has been his plan since the beginning. And from what I have seen and heard since this demon inspired report by “Inside Edition,” he is succeeding in the Body of Christ.

SHAME ON YOU, PASTOR! You should have been the FIRST to speak on this in your Sunday sermons! Whether you dislike Kenneth Copeland and his ministry should not matter. There are many of YOU whom I disagree with as well. Many of YOU that I do not accept your Biblical interpretations either. BUT – we can agree on one thing – JESUS! And therefore, I support you, defend you and pray for you.

(OH, silly me…I forgot…YOU are stuck inside your own churches pretending to be impacting the world with the Gospel. Ok – you can go back to your “works” now)