Columbus and the Crisis of the West 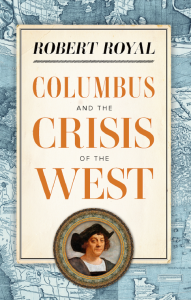 There has been a lot of controversy lately concerning the history of America. The “woke culture” or the “cancel culture,” if you will, is trying to rewrite history. Part of the problem is because the current public education system has failed to adequately teach American History the way it actually happened.

We’ve seen statues taken down that depicts a time in our history that needs to be understood and even lessons learned so mistakes that happened along the path of the freedom’s we currently enjoy, do not happen again.

One of those lessons is about the actual discovery of this nation. The very first explorer to set foot in the new world, as it was called.

Well, my guest today is about to set the record straight in the regard.

Robert Royal is the author of the book, “Columbus and the Crisis in the West.” Robert Royal is the founder and president of the “Faith & Reason Institute” in Washington, DC. He is the editor in chief of the “The Catholic Thing,” an online publication that appears daily and is translated into five languages. He has authored several books. He holds a PhD in comparative literature from the Catholic University of America. He has appeared on various television and radio stations around the United States and we are blessed to have him with us today on this program.

Help me welcome to the program, Dr. Robert Royal. Dr. Royal, thank you for coming on the program today!

First question, other than that brief information I just shared, tell us in your own words, “Who is Robert Royal?”

Back when I was in school, we had to learn dates and facts about history. One of those dates is October 12, 1492. When Christopher Columbus set foot on land in what was termed the “new world.” But now, instead of celebrating that date, we are now in a culture that despises that date.

In your book, you acknowledge Columbus was not perfect, as any person in history and especially today, were not and are not perfect. But, you lay out the case that Christopher Columbus his positive contributions should be recognized, correct?

How is it that slavery, racism and all the bad things we see people talking about, can be laid at the feet of Columbus?

I love history. And I have read some materials over the years about Christopher Columbus. There is a discrepancy about whether Columbus was a Christian, a Jew or an agnostic. What has your studies uncovered?

The society and the religious persecution in Europe and the wars with the Islamist along the trade routes to China is what caused Columbus to focus on a route to the China by traveling west, correct?

If I remember correctly, he did not take a direct route from Spain westward. Didn’t he travel south to catch the trade winds that were blowing west rather than fight the headwinds that he would’ve experienced up north?

How many trips did he actually take to the west and did he ever come to shores of America itself?

Wasn’t he imprisoned on the last trip? By the governor of the island?

When he made it back to the King & Queen, I think I remember they rose to their feet to honor him and had him sit next to them instead of in front of them, correct?

This is all so fascinating Dr. Royal. How can someone get a copy of your book?

I encourage you to go down into the show notes below and order yourself a copy of Dr. Robert Royal’s great book, “Columbus and the Crisis in the West.”

Folks, go down and click the link to order your copy of “Columbus and the Crisis in the West” right now.

Book – “Columbus and the Crisis in the West” on Amazon