Preparing for the Soon Return of Jesus – John Meacham pt 1 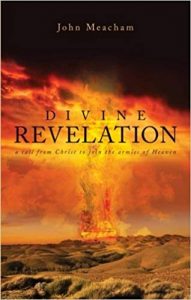 John Meacham has served Christ’s Church as a Christian author, lay pastor, supply preacher, elder, workshop leader, small-group coordinator, Bible-study instructor, and Sunday-school teacher. As a part of his church work, John developed a small-group program titled AIM (An Involved Membership) and prepared a group study guide for the book “Is Your Church Heavenly? A Question from Christ for Every Christian” (published in 2008)

JohnMeacham spent eight days at the Sea of Galilee in 2005. During this time, he received a new revelation from Christ that involved messages that spoke of the state of the seven churches in today’s modern time. His previously released work, ‘Is Your Church Heavenly?’ details both his experience and the messages he received, and I recommend that book to you.

Help me welcome back to the program, John Meacham! John, it’s good to talk with you again, my friend!  How have you been?

Ok, to catch everyone up, give us a brief reminder with the answer to my first question, which is always, “Who is John Meacham?”

Now, we are talking about your vision and understanding that Jesus is returning very soon.

But I want to focus on today, at the time of this recording, is September 19, 2019. And you say that today is Jesus actual birthday. Can you explain how you came to understand that?

This date is not what is typically celebrated as Jesus birthday in Christian circles. The tendency is to celebrate it at Christmas time – even though most people will agree that is not the date.

How is your message being received?

Have you had any churches respond to your initiatives for making Advent in September?

We talked a lot in our prior interviews about your seven messages to the church. What has been the feedback you received from those interviews?

Last time we talked, you had reached out to a local pastor who had asked you, if I’m not mistaken, to stop attending his church. You had asked him to sit down and discuss your opinions and he could state his and see how the Bible stacked up to those two positions. I think I summed that up pretty close without going into too many specifics. I don’t want to discuss names or anything like that, but how did that ever turn out?

I’ll put links to that in the show notes below.

Folks, there can be no doubt that the events happening all around us is what has been foretold in the Bible to be happening as the Church age is wrapping up. The soon return of Jesus MUST BE right around the corner!

Can John Meacham be right? It’s possible. It’s not only possible, it is highly probable. Current events are pushing towards the wrap up of this age. Could it be in just a couple more years?  YES! Could it be sooner? I believe it could be?  Could it be later?  All I can do is pray, “Come Lord Jesus, Come!”

But, if you would like more information on this very important topic, I urge you to get in touch with John Meacham on his website, www.dazzlinglight.org. Read the articles and the information he has posted there. Come to your own conclusions. But, more importantly, look at his references, read your Bible and PRAY that the Lord would open your eyes, your heart and your mind to the day and time in which we live. Allow that to help you in determining if you are living a true Christian life with the promise of Eternal reward – or if there is any doubt, you still have time to get right with the Lord and ask Him to forgive you, to come into your heart and create in you a NEW MAN – a new creation, created in His image! And then you will have the assurance to face whatever this world tries to throw at you! Amen!