The Mind of A Conservative Woman  Senator Marsha Blackburn 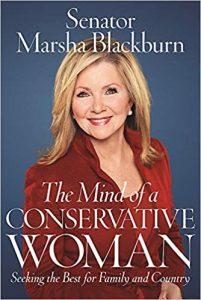 My guest today is Senator Marsha Blackburn, author of the book, “The Mind of a Conservative Woman: Seeking the Best for Family and Country.” which challenges women to improve their place in life and open doors for themselves, and the next generation, through the courage of their convictions. Senator Blackburn expounds upon why beliefs labeled as “traditional” really have common ground and can improve all of society.

Senator Blackburn is the first woman ever elected to the United States Senate from the great state of Tennessee. Before she was elected as a Senator, she represented Tennessee’s Seventh District in the United States Congress for sixteen years and served as a state senator for four years before that. She is known for her mastery of the political process, her fiery defense of her principles, as well as her wit. Senator Blackburn is a mother of two, a grandmother to two, and a wife to her husband, Chuck, to whom she has been married for more than forty years.

Why did you feel the need to write this book at this time?

You created your own personal mission statement and have it down to five powerful words that describe you and your passion. I believe these words will be an inspiration to our listeners. Would you mind sharing them with us?

You have a saying, “Give back more than you take and leave things better than you have found them.” When did you realize this saying applied to you?

I love the example you explain about sometimes viewing yourself as a “Caucus of One.” Can you explain what that means and how it relates to, not only you, but believers in general today?

You describe, accurately I might add, the primary differences between liberals, libertarians and conservatives. Would you share those differences with our listeners?

Folks, you need to get a copy of this book by Senator Marsha Blackburn, “The Mind of a Conservative Woman: Seeking the Best for Family and Country.” It is available on Amazon and the link is down below. If there is one book you need to read – and share – this election season, it’s this one! Just go down into the show notes below and click the link. Now, here’s an idea. Buy two or three of these book!  You know Christmas is coming just around the corner! But a few and pass them out as gifts to encourage other Christian Conservative women that you know. Guys, buy one for you wife! Go down into the show notes and click the link today. Take care of it right now, while you are thinking about it.

Book:  “The Mind of A Conservative Woman” – on Amazon